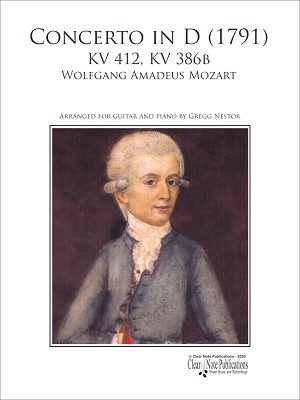 Mozart Concerto in D for Guitar and Piano

Austrian-born Wolfgang Amadeus Mozart (1756–1791), unquestionably one of the greatest composers in history, began his career as a 6-year-old piano prodigy touring Europe with his father (Leopold, 1719-1787) and sister (Maria Anna, or “Nannerl,” 1751-1829), and he absorbed and mastered all the contemporary musical trends he was exposed to along the way.

When Mozart reached the ripe old age of seven he made the acquaintance of Joseph Leutgeb (1732-1811), one of his father’s colleagues and a leading horn virtuoso of the day. Leutgeb remained a lifelong friend, and Mozart wrote his horn concertos specifically for him – the autograph copies of the solo horn part even includes personal and ribald messages from the composer to the performer. 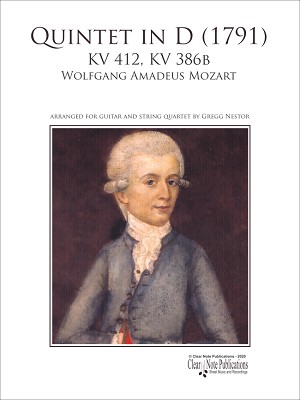 Mozart Concerto in D for Guitar and String Quartet

The Mozart Concerto in D was composed in 1791. This version, newly arranged for guitar and piano as well as for guitar and string quartet by Gregg Nestor using the composers original orchestration, is the only one out of four that was written in the key of D Major, and contains no slow second movement, perhaps due to the composer’s untimely passing.

We are grateful to Dr. Lin He, Associate Professor of Violin, Louisiana State University who contributed to refinements of the guitar and string quartet edition.