Here is Gregg’s fine arrangement of Chabrier’s Habañera for violin and guitar. 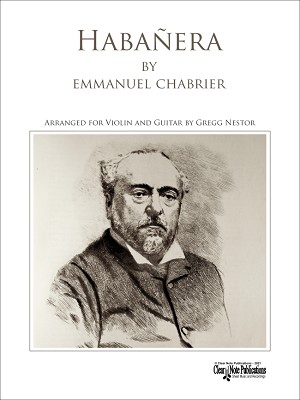 Chabrier was an important influence for subsequent generations of French composers (most notably Ravel who acknowledged his debt to the older composer), although his music was appreciated more by his fellow artists than by the public. His best works stand as beautiful and iridescent jewels.

Chabrier’s fascination with music of Spain music is well known from his sultry Habañera. He composed the piece in October 1885, using a theme he had collected during his five-month trip to Spain. This is a gentle masterpiece, played at a slow tempo to make the most of the characteristic rhythm (originally imported from Cuba) familiar from Bizet’s Carmen and Saint-Saëns’ Havanaise.