Les plus jolies chansons du pays de France by Emmanuel Chabrier arranged for voice and guitar.  Here are the sixteen songs that Gregg has set: 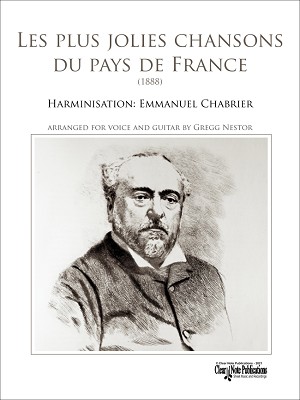 In 1888 the firm of E. Plon, Nourrit et Cie published an extremely handsome and substantial volume of folksong arrangements with beautiful illustrations, both in color and black and white, by Lucien Metivet. The composer was approached and contributed these sixteen miniatures for the publication. His touch in these pieces is deceptively light and restrained; but time after time his musical contribution adds enormously to the music’s charm.

Chabrier was a man of the country; if in 1888 the study of folksong had been the serious movement it was soon to become, he might have been in its vanguard. In any case it is clear from these arrangements that he was delighted with these old melodies. When one considers the later arrangements of folksongs by Canteloube, Ravel, Grainger, Bartók, Britten and so on, it is clear that Chabrier was something of a pioneer among the greater composers in working in this field.

Gregg Nestor has arranged sixteen of these beautiful jewels for voice and guitar from the published voice and piano originals. They have been organized in a suggested performance order but would also work well as individual selections for concert or encore use.