Here’s another excellent Chabrier piece called España! that Gregg has arranged for voice and guitar. 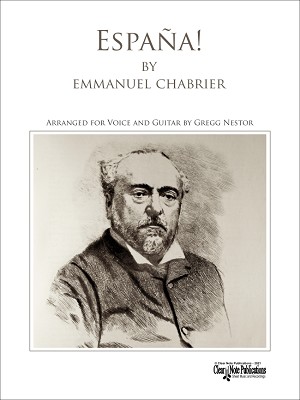 The first performance of Chabrier`s famous symphonic rhapsody España on 4 November 1883 made him a celebrity overnight. After such a success the publishers were keen to have transcriptions made which would bring this new hit into the home. No less than six vocal arrangements were made, some for two voices. Only one of these – the solo version that forms the basis of this arrangement – was Chabrier`s own work. This was ‘L’Edition de concert à 1 voix’.

The composer Emile Louis participated in the preparation of this arrangement in some way that is not entirely clear. He probably undertook the initial task of lining up the text of Adenis which had to be grafted on to a vocal line invented for the occasion: Chabrier himself probably supervised the final stages and the finer points of the accompaniment. Certainly the composer changed certain words in Adenis’s poem and substituted what he regarded as more felicitous expression of his own.

It is clear from his letters from his Spanish visit that Chabrier was mesmerised by lady dancers. He wrote: “The women are pretty, the men well built, and on the beach the señoras who have ample bosoms often forget to fasten their costumes. I’ll bring buttons, needle and thread to help them: to be of service is my only concern”; and later: “What an eyeful we are getting of Andalusian behinds wiggling like frolicsome snakes”.

One can wonder at the composer’s genius for finding and manipulating Spanish rhythms and melodies (some of them assiduously transcribed during this sojourn) which sound more Spanish than the Spanish. This piece of music (at least in its original version) is one of the high-water marks of the dazzling ability of French composers (Lalo, Debussy and Ravel are others) to evoke the musical manners of Spain without musicological accuracy, and without compromising one iota of their own personalities. The French adored the work and the Spanish hated it. As composer Francis Poulenc put it, “the wrought-iron grilles of España come straight out of a big French department store”. Such a remark from that inveterate Parisian was meant as a compliment to his beloved Chabrier.

from notes by Graham Johnson