Gregg and Duo Vitare worked together to create the lovely video of the Ravel Chanson Romanesque from Don Quichotte à Dulcinée that you see above. The video even includes an elegant dance interpretation of the work. Duo Vitare does a great job with Gregg’s arrangement of the Ravel piece for cello and guitar.  You can find this arrangement and many others in the Gregg Nestor Collection on the Clear Note website. 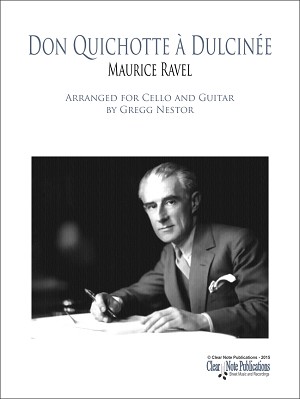 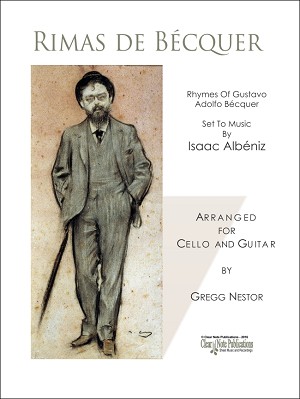 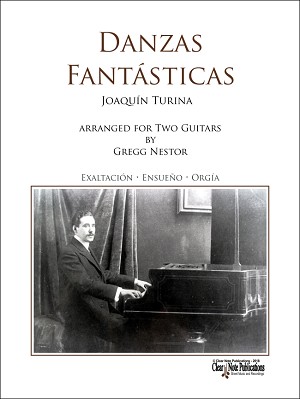 Danzas Fantásticas! The title alone of this excellent arrangement for two guitars already gets one excited.  It promises to be a great joy for any two guitarists who play it.  The score along with an audio download card is available here.  The audio is taken from the CD called Kaleidoscope recorded by Gregg Nestor and Raymond Burley.

Danzas Fantásticas, Op. 22, originally written for piano and later orchestrated, were premiered in 1920. The work takes inspiration from the poetic ideas expressed in the novel La Orgía by José Más (1885-1940).

Exaltación (Exaltation) is prefaced with the words – It appeared like the figures of some incomparable picture, moving within the calyx of a flower – and begins meditatively before progressing to the vigorous rhythms of the jota.

Ensueño (Reverie) is more melancholic – The strings of the guitar sound like lamentations of a soul no longer able to bear the weight of sorrow. The rhythmic pattern established after the opening trills is the zortzico, a Basque dance performed on flutes and drums, characterised by a 5/8 rhythm. The pulse is firmly stated before the advent of a delightful melody. An expressive middle section, Allegretto tranquillo, changes the mood towards the reflective until the return of the zortzico. In a short coda a few bars of the Allegretto’s 6/8 rhythm reappear before the quiet 5/8 ending. 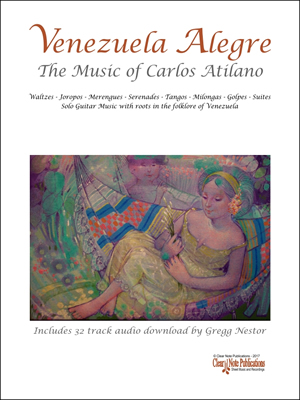 Gregg has provided a great treat for lovers of Venezuelan music.  He has just published 32 pieces of Carlos Atilano in a 70-page volume.  As an additional treat, the package includes a delightful 32-track digital download of Gregg playing all the pieces.

“…no mere Lauro clone… The music is unmistakably Venezuelan… spicy without being ground-breaking. Atilano is writing in a familiar tradition, while remaining his own man in his own time.”
Colin Cooper – Classical Guitar Magazine (October, 2012)

Atilano composes in a number of Venezuelan styles including the following:

Carlos Atilano’s guitar pieces almost invariably have their roots in the folklore of Venezuela. He proudly says: “All the pieces that I have written were inspired by pure love for my native land. Being away from Venezuela brings in me that nostalgia which comes from longing for my homeland, its music, its places and the aroma of the tropics.” 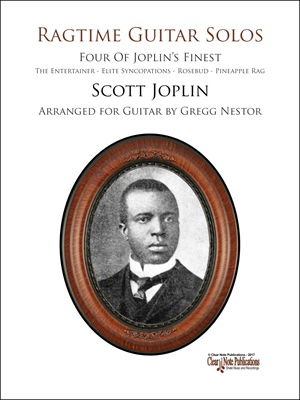 Scott Joplin was born in Northeast Texas in around 1867, just outside Texarkana, and was a street performer before settling in Sedalia, Missouri, St. Louis, Missouri, and finally New York City where he died in 1917. He was an American composer and pianist, who achieved fame for his ragtime compositions, and was dubbed “The King of Ragtime”. During his brief career, Joplin wrote over 40 original ragtime pieces, one ragtime ballet, and two operas.

As a composer Joplin refined ragtime. This new art form combined Afro-American folk music’s syncopation and nineteenth-century European romanticism, with its harmonic schemes and its march-like tempos. With this as a foundation, Joplin intended his compositions to be played exactly as he wrote them – without improvisation. The composer wrote his rags as “classical” music to raise ragtime above its “cheap bordello” origins and produced works which were described as “…more tuneful, contrapuntal, infectious, and harmonically colorful than any others of his era.”

For this publication, four of his finest were arranged for solo guitar. Although grouped as a “suite”, they can be easily played and presented individually. 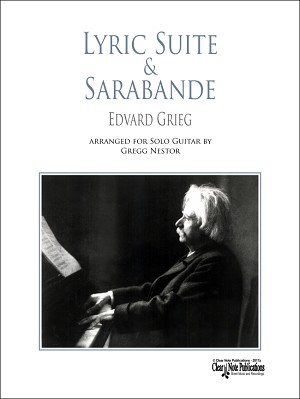 The Edvard Grieg Lyric Suite & Sarabande is another of Gregg’s excellent arrangements for guitar.  The present work is for solo guitar, but Gregg also has published another Grieg work, The Holberg Suite, Op. 40, for guitar and chamber ensemble.  Both of these fine works are available at Clear Note.

“Bach and Beethoven erected temples and churches on the heights. I only wanted to build dwellings for men in which they might feel happy, and at home.”
Edvard Grieg

Edvard Hagerup Grieg (1843-1907) was a Norwegian composer and pianist. He is widely considered one of the leading Romantic era composers, and his music is part of the standard classical repertoire worldwide. His use and development of Norwegian folk music in his own compositions put the music of Norway in the international spectrum, as well as helping develop a national identity.

Grieg’s character and personality shine through in almost all his published compositions. Nowhere are they more vividly evident than in his Lyric Pieces. Six of these exquisite jewels have been set for solo guitar as a short suite, but can be played as separate pieces in concert.

A Sarabande from the “Holberg Suite” has also been included in this edition as a stand-alone work. 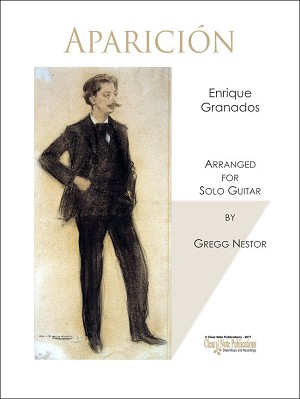 Gregg arranges mostly for ensemble with guitar, but in this case he has made a solo guitar setting of the piano piece Aparicíon by Enrique Granados pub. by Clear Note.

Composer Enrique Granados, along with Isaac Albéniz, brought modern Spanish music into the home of the avid music lover. Most of Granados’ works are for piano solo, and through them he created a unique style of writing for the [then] modern school of Spanish keyboard music. Many of his works have been successfully arranged for guitar and are among the all time audience favorites in the instrument’s literature.

Aparición was composed for the “Cateura” pedal piano, an instrument invented around Barcelona at the beginning of the twentieth Century. No known examples of the “Cateura” are known to have survived; however, through indications of the scores in the works Granados wrote for it, the pedals must have provided special coloristic tonal effects.

This arrangement for solo guitar by Gregg Nestor also uses fingerings that help emphasize the ringing sonorities, adding to the charm and beauty of this jewel.

Cinco Piezas Populares by Granados is another set of pieces that Gregg and Clear Note have collaborated on.  This set just came out very recently.

Composer Enrique Granados, along with Isaac Albéniz, brought modern Spanish music into the home of the avid music lover. Most of Granados’ works are for piano solo, and through them he created a unique style of writing for the then modern school of Spanish keyboard music. Many of his works have been successfully arranged for guitar and are among the all time audience favorites in the instrument’s literature.

This collection, in two arrangements  for guitar duo and for guitar quartet by Gregg Nestor, consists of works from the composer’s youth (circa 1890 – 1895) and strongly convey the nationalistic elements so pronounced in his elegant style. They have been organized as a suite of contrasting movements, but can successfully be played as stand alone pieces.