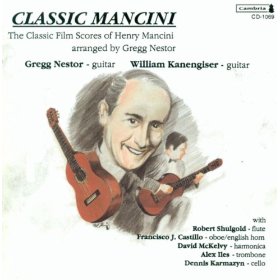 Henry Mancini gave his autobiography, published by Contemporary Books of Chicago in 1989, the title Did They Mention the Music? , voicing the anxiety common to all composers for motion pictures. For no matter the long experience and the success, composers in this genre always wonder if what has been written for the screen will be noticed enough for anyone to comment upon it. After all, the art of scoring is largely subliminal – the music is meant to be felt rather than heard. However, in the case of Henry Mancini, it is an anxiety that applies less to him than to anyone who has ever written music for the screen. Even people who hardly ever notice music in the movies notice Mancini – in fact his is probably the dominant name that comes to the mind of most people when asked to name a film composer. The reasons for Mancini’s immediate identity go far beyond his skill scoring films. What he has written has not only fulfilled the functions of scoring – the subtle process whereby a film is given another dramatic and emotional dimension – but so much of what he has produced has had a lasting appeal. He is a man gifted with that most sublime of musical gifts – melody, along with the ability to craft his creations so that they touch the listener in a direct manner.