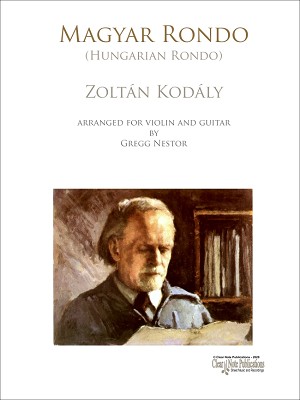 Zoltán Kodály occupied a position in Hungary much like that of Vaughan Williams in the United Kingdom: as the great national composer who, by his discovery and creative use of his folk-music heritage, and the role he must play in society as an educator and fulfiller of cultural needs, forged the standard by which twentieth-century Hungarian music should be judged. He was a protégé and colleague of Erno Dohnányi and a lifelong friend of Béla Bartók.

In the early 1900’s, Bartók and Kodály uncovered the older, more authentic Hungarian folk music by going into the countryside with a phonograph and recording the actual melodies people sang and danced to. It was a discovery of enormous significance—the recovery of a national heritage, a national identity.

The Magyar (Hungarian) Rondo was composed in December 1917. The rondo form is shaped out of four Hungarian folk songs and an instrumental dance melody. This version, originally for cello and piano has been adapted by guitarist Gregg Nestor for violin and guitar as well as cello and guitar – as bravura showpieces for these instruments.

We are grateful to Dr. Lin He, Associate Professor of Violin, Louisiana State University who contributed to refinements of the violin and guitar edition.